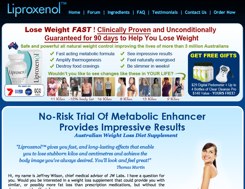 Liproxenol is a weight loss supplement that appears to be marketed solely through the manufacturer’s websites. There are three sites: one for UK customers, another for Australians, and the third site is shared by those who live in the US and Canada.

The manufacturers claim that Liproxenol has a fast acting metabolic formula that amplifies fat burning, destroys the craving for food, and makes the user feel naturally energized.  They also promise a weight loss of up to 1 ¾ stone in just 8 weeks.

What Is Liproxenol And How Does It Work

Liproxenol is a diet pill that utilizes a combination of several natural ingredients to suppress the appetite, while enhancing the metabolism and encouraging the body to burn more fat. Some of the chosen ingredients already have a good reputation for helping to achieve the kind of results claimed for Liproxenol, but the manufacturers fail to disclose sufficient information about some of the inclusion rates, so it is hard to surmise how effective the product is likely to be.

Liproxenol does not appear to have been the recipient of any mass media attention, nor are there any celebrities of sports people actively promoting its use or proclaiming its benefits. Independent reviews are also slim on the ground, but—as is to be expected—the official websites carry many testimonials from satisfied customers, at least one of which is presently under investigation because it is believed to have originated on another site and to be about a competing product.

The manufacturers claim that no side effects have been reported, but the ingredient Garcinia Cambogia is known to be toxic if ingested in sufficient quantities, so caution is advised and this product should be avoided by pregnant or nursing mothers and people who are taking prescribed medication. Anyone who has doubts about their health should, of course, seek medical advice before commencing any new diet or beginning a course of pills or supplements.

Some of the details about this product are pretty sketchy and the amount of information offered by the manufacturer varies on each of their sites. The money back guarantee is also variable. Buyers in the UK and Australia are offered a 90 day guarantee, but North American customers are allowed just 30 days, and—more worrying—any orders placed from the US or Canada are automatically subject to recurrent billing.

A considerable amount of complaints have been made about this product and it has not escaped entry on the Scambook website. At the time of this review, the site lists a total of 44 complaints. Many of these are regarding issues of repeated billing, but there are also reports of painful side effects, with one complainant even claiming the product caused him to put on weight.

There is a lack of evidence to support the weight loss promises made for this product, and the many possible negatives involved with its purchase and use mean that Liproxenol cannot be recommended. Many better alternatives are available.

Available from the official website only, as mentioned above there is a US and Canadian site as well as a UK and Australian version.

Not available from health supplements stockists and specialists, although has been spotted on ebay and Amazon – it is best advised not purchase diet supplements or nay health supplement from Amazon or ebay unless it is the manufacturers own ‘store’.

PhenQ is our top choice – it is also a fat and appetite suppressant. Unlike Liproxenol, PhenQ has a superb relation with it customers and actively encourages users to send in their experiences.

PhenQ is a premium diet pill that is available to buy direct from the manufacturer (cutting out the middle man) and without prescription.