Metabolism Support is a diet pill manufactured by Ripped Femme. The company markets three other supplements and the entire range of products is designed especially for women.

According to Ripped Femme, Metabolism Support is the first fat burner “truly formulated for a woman’s unique hormonal (endocrine) system”, but a number of manufacturers make similar claims for their products.

In most cases fat burners for women contain standard diet pill ingredients that are found in any number of products that are used by men as well. Ripped Femme Metabolism Support is no exception. Despite the company’s best attempts to make the capsules sound more complicated than they are, they only contain one ingredient that offers particular value for women (Indole-3-Carbinol). It’s unlikely to support weight loss, but it may offer protection against estrogen-enhanced cancers.

What is Ripped Femme Metabolism Support and How Does it Work?

Ripped Femme Metabolism Support is designed to speed up the metabolism. A faster metabolism burns more calories. When there are no more (food provided) calories left to burn for energy the body will be forced to start using its stores of fat.

Usage Instructions – One capsule is required three times per day (taken with food). A gap of three to four hours should be left between doses.

Some women say the formulation works, others say it does not.

“These wonderful pills helped me to reduce my dress size from 14 to 8. I’m totally delighted.”
“It’s supposed to be a fat burner for women. The pink label helps it look the part, but if you expect it to burn your fat you are going to be disappointed.”
“I lost 19lbs in 4 weeks by using these pills with diet and exercise, so I am happy to say that they work.”
“I’m a 23 year old female who wanted to get in shape for the summer, but this female fat burner didn’t help at all.”

Women who are planning to use Ripped Femme Metabolism Support for longer than 12 weeks are told to consult a healthcare practitioner first, but Ripped Femme fail to mention if side effects are likely to be an issue. However, the product is unlikely to be suitable for women who are pregnant or nursing a child. It is also usually advisable to seek a doctor’s advice, before using any form of supplement, if you have existing health problems or are using medication of any kind.

Ripped Femme Metabolism Support is available from a number of popular Canadian suppliers, including GNC and FitShop.ca. Each bottle contains 60 capsules and generally retails for $50-$60 (depending on the chosen supplier).

There is no manufacturer’s guarantee.

Ripped Femme Metabolism Support contains several good ingredients, so it seems likely the formulation will help improve weight loss results if it is used alongside diet and exercise, and we see no reason why the formulation wold not work equally well for men.

However, the formulation is only designed to speed up fat burning. It does not provide appetite suppression or any other benefits dieters may need.

This may explain why the pills appear to have failed as many people as they have helped.

Fat burning diet pills can be good for accelerating weight loss, but if people cannot control their tendencies to overeat the body will be provided with more calories than it is capable of burning and the excess will be stored as fat in the normal way. This is the reason why so many weight loss experts state it is preferable to use products that tackle weight loss from a number of different angles.

As an author of literally hundreds of reviews of diet products I get slightly agitated when I read about products that are targeted for women (or men) only when the ingredient profile does not really reflect this. I prefer something universal and tried and tested – I recommend PhenQ.

PhenQ is multi action – it can help to burn fat, block the introduction of new fat while suppressing appetite. It can also help provide and energy boost.

4Gauge is a pre-workout supplement brought to market by Roar Ambition. The company is based in the UK and customer feedback suggests they have succeeded in creating an excellent product.

Roar Ambition also deserves a pat on the back for coming up with such a creative marketing idea.

If you were shopping for the most powerful shotgun you’d probably end up buying a 4 gauge. Roar Ambition claims their pre-workout supplement is an equally surefire winner and they take the shotgun idea a little further by packaging their product inside a plastic container that resembles a giant shotgun shell. 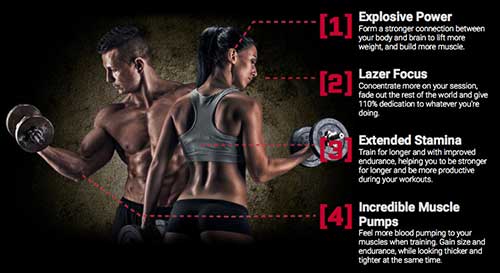 Who the Formulation is For

4Gauge is designed to support the needs of men and women who want faster results in the gym, to see an improvement in the way they perform while doing their chosen sport, or to feel more energized and focused while exercising.

Usage Guidelines – Mix two scoops of 4 Gauge with 300-350ml of water and drink 15-45 minutes before training. If you want to, you can double the dose, but Roar Ambition suggests new users see how they go with the normal dose first. The product is suitable for long-term use, but a one-week break is recommended every six to eight weeks.

“If you are tired of feeling too tired to put in a good training session, I recommend 4 Gauge. It works for me, so there is no reason it won’t work for you too.”
“This stuff is the business. It tastes better than any pre-workout I’ve tried in the past and it works better too. The energy boost is amazing, there’s been no side effects at all, and I’m getting stronger every week.”

“I needed something to help me stop feeling so tired in the gym. 4 Gauge has pumped a helluva lot of extra life into my training sessions. It’s good stuff. Try it, you’ll see.”
“I’ve been let down by pre workout supps in the past, but I’m happy to say 4 Gauge does what it’s supposed to do. It helps me to train harder and I’m already seeing some good gains (strength + size).”

Product Suitability and Side Effects

4Gauge is a high quality product produced in FDA and GMP certified facilities, so customers can be confident there are no undisclosed or dangerous ingredients. The formulation is also vegetarian friendly, but it is unlikely to be a good option for women who are pregnant or nursing a child.

No side effects have been reported, but people who have existing health issues would be wise to ask their doctor’s advice before using any brand of dietary supplement. The same advice holds true for people who are using medication or planning to stack 4 Gauge with other supplements.

4Gauge is designed to provide a number of benefits that will help people enjoy better workouts and attain more “explosive” results. The combination of ingredients used in the formulation has the ability to do all the things Roar Ambition promise and customer feedback is good. If you are looking for a powerful pre-workout supplement, you won’t find a better option than 4 Gauge.

Where To Buy 4Gauge Pre Workout 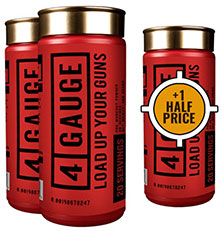 4 Gauge is only available via the manufacturer’s website. Each “round” contains 20 fruit punch-flavored servings and has a price tag of $45 US – Pricing is also available in your local currency (£, AUS$ and euros)

Customers who purchase three rounds in a single order get the third round for half the normal price.