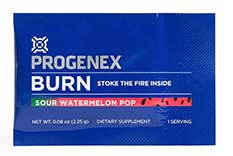 Progenex Burn is a dietary supplement brought to market by Progenex, as the name suggests, it’s intended to work as a fat burner and it differs from other fat burners in a couple of ways.

First of all, instead of producing the product in a standard format, such as a diet pill or diet drops, Progenex have opted to harness the active ingredient in pop-rock candy that has to be poured onto the tongue.

The second big difference between Burn and other fat burners is it’s designed to help people to burn extra calories while the body is at rest.

How the Formulation is Designed to Work

According to the marketing material, Progenex Burn is a “state of the art weight management and sports performance supplement” that activates receptors in the mouth.

This apparently increases the body’s ability to use fat for energy. This is an outlandish claim. If the formulation provides any benefits at all, they will come into play because the active ingredients have been digested and absorbed into the blood.

All that popping is a sweet idea, but it serves no credible purpose.

Even when the body is asleep these nativities need to be maintained and calories are burned in the process.

The way burn is intended to work may sound good on paper, but even if Burn does what it’s supposed to do, the amount of extra calories burned per day is unlikely to be significant and will only be of benefit to people who are already burning fat due to a calorie shortage created by diet and exercise.

The only active ingredient is dihydrocapsiate. It’s similar to the capsaicin provided by chili peppers, but is not such a fiery customer. This allows it to be gentler on the stomach.

However, there appears to be some doubts about its ability to support weight loss and the results of at least one study suggest it’s as lacking in potency as it is in fire. To be fair, the data showed dihydrocapsiate had helped the participants in the study to burn an extra 50 calories per day.

Unfortunately, there are 3500 calories in a pound, so it would take nearly two-and-a-half months to burn a pound of fat. This being the case, there appears to be some truth to Progenex’ claim that Burn will “stoke the fire inside”, the only problem is it’s going to be such a slow burn it isn’t worth mentioning.

Usage Guidelines – designed to be used like pop-rock. All you have to do is empty the contents of the sachet onto your tongue, close your mouth, and wait for the popping to stop before you swallow it. Up to three sachets are allowed per day and the best time to take them is first thing in a morning, before eating a meal, or before starting a workout.

“Progenix Burn is the biz when it comes to giving you extra energy. I use it before training and it really helps me to up my game.”
“This stuff tastes terrible and all it does is give me gas. I am no more energetic after I’ve taken it and I have not lost any weight. It lives up to its name though. I’ve been burned again. When will I ever learn?”
“I feel a little more energetic after I’ve taken Burn, so I suppose it must be doing something, but I would have expected more for the money.”
“One word for this *garbage*. Don’t buy burn it doesn’t work. Buy something else instead.”

Side effects shouldn’t be a problem for most people, but women who are pregnant or nursing a child should play it safe and get a doctor’s approval before using a supplement like this.

The same advice holds true for people with existing health problems and for anyone taking medication.

Where to Buy Progenex Burn

Burn is only available from the Progenex website. The flavor choice is limited to watermelon and cinnamon and the cost per box is just under $25.

Customers who are only using one sachet per day are getting a pretty good deal, but Burn will work out expensive for anyone using two or three per day and, in all honesty, popping sensation aside, you are not getting a lot for the money.

There does not appear to be a money back guarantee.

Customer reviews suggest Progenex Burn may have value as an energy provider, but anyone using it as a pre-workout supplement will probably find it is not as powerful as some of the other options available.

CrazyBulk have several steroid alternatives that are excellent pre-training aids and will be a much better option for anyone who wishes to up their game in the gym.

Progenex Burn is a pretty poor option when it comes to weight loss as well.

Granted, it may help people to burn a few extra calories, but it would probably take years to deliver noticeable fat loss.

All of the diet pills on our approved list are capable of providing a more significant boost to the metabolism and faster fat burning. Good diet pills like PhenQ also suppress hunger urges.

Progenex Burn is not designed to do this so there is every probability that users will continue to overeat and lose no weight at all. Progenex gets top marks for coming up with a unique product, but their pop-rock candy is only really going to be a viable option for people who are willing to lose weight slowly.

People who want to lose weight fast will need to look elsewhere.

Click here to view the recommended alternatives to Progenex Burn